Posted on January 7, 2014 by thesamemountain

Happy New Year! I hope the festive season has brought you some time for rest and relaxation, along with some space to consider what you would like 2014 to be about.  Having encouraged you last month to start playing with developing more of an awareness of what your thoughts were busy doing, I thought I’d best be putting that in to action too.  My eldest and I have been using the Headspace App together to spend some time in daily meditation, and I love the whole “two birds, one stone” thing where I’m spending quality time with my kid, connecting with my values, teaching him a new skill, and indulging myself in something pretty lovely.  Wait, that’s four birds.  Talk about bang for my buck!

How have you been doing? Hopefully you’ve also had the chance to play with your thoughts.  Are you ready to take the next step? A dear friend of mine mentioned he felt the last skills post pulled up short just when it was getting interesting – so if you felt similarly, let’s “level up”.

Do you remember the last time you learned a new skill (I’m not digressing here, stay with me)?  I do – quite distinctly.  Last year I learned to ride a bike.  It was something I never really mastered as a child, and apart from one brief, failed attempt about 14 years ago, I hadn’t even tried since I was maybe 12 years old.  It wasn’t easy – though to be honest, not nearly as hard as my mind told me it was going to be.

One of my values is being active with my family, and my family love cycling – so there was my motivation.  I bought a kick-bike – a bit of a glorified scooter.  It was fabulous fun, gave a great work-out, and it had the advantage of being close to the ground and nearly impossible to fall off, so it gave me plenty of time to develop my confidence with balance, moving at speed, and being on a road.  In fact, for a while I thought maybe that was close enough.  However (many months later) I went on a couple of “test” rides on an actual bike with my supportive partner cheering me on.  I then embarked on riding alone on paths, and finally – what an adrenaline rush this was – I made it into the bike lane on the roads.  As I whooshed along the street on those early rides, my entire soul was longing to scream out “YEAH, I’M RIDING IN THE BIKE LANE!!!” – I wanted to post it on Twitter and Facebook and clearly have even found a way to blog about it.  Look at me – you can teach an ol’ dog new tricks. 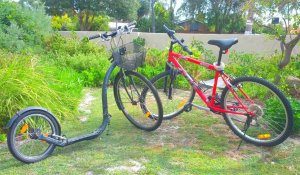 I could have read a million texts on bike-riding, but nothing was going to happen until I put my feet on those darn pedals

Playing with your thoughts – it’s exactly like that.  It’s a new skill – it takes time, it takes practice, and it feels pretty clunky and chunky to begin with.  At the start, you may need to set yourself reminders and alerts, and the playful tasks might feel quite cognitively heavy.  As your skills develop, you will become more fluid, it will be less labour-intensive, and before you know it, you’ll be riding in the bike lane too (metaphorically, admittedly).  That’s my way of telling you, you need to PRACTICE this stuff, folks.  Reading my blog, even if in conjunction with reading ACT self-help books, even seeing an ACT therapist will not get you there until you start putting it into action yourself.  I could have read a million texts on bike-riding, but nothing was going to happen until I put my feet on those darn pedals.

So why not get started right now?  If you’re willing, pick a thought that nags at you –  something that your mind likes to feed you when it wants to really kick you in the guts.

Now, hold that thought tight in your mind – see if you can believe it, as true as true can be.  While you’re holding it tight – just notice what that feels like. Notice what happens in your body whilst you’re concentrating so hard on believing that thought.

Next, try these, and after each one, just notice what happens – what changes, what doesn’t:

Did you give it a go?  If not, stop reading and give it a go now – try out those pedals.  I don’t want you taking my word on any of this – and I’m not too interested in your mind’s opinion either (“It’s boring”, “there’s no point”, “I haven’t got time right now”, “I already know what will happen” – THANKS MIND!) – What I AM interested in is what your EXPERIENCE tells you when you give it a go.

What’s the point of these exercises? It’s all about getting that space between you and the thought your mind is busy having – being able to break through some of the rules of language and see the thought just as it is – a string of arbitrary sounds to which we attach meaning – not fact, not evidence, just noise.  These exercises aren’t designed to make the thought go away (remember, they’re here to stay, folks) – they are aimed at changing the relationship you have with those thoughts – so that you can choose your actions based on what matters to you, not on a fruitless attempt to control your thinking.

This isn’t the whole picture, and there’s more tools for your toolkit yet – but it’s something to get going with right now.

Play with this stuff! You don’t have to do the entire exercise above with every thought that bothers you – but play around with some of them and let your experience (and not your mind) guide you in what’s helpful.  Often, just being able to NOTICE “I’m having the thought…” is enough to make some room.  When it’s not enough, try out some of the others.  Remember that it will feel chunky and clunky to begin with – but that’s just because you’re busy learning something new.

Meanwhile, you don’t have to wait around for me to cover this stuff in blog-sized chunks.  Check out my page on books I recommend – of which, The Happiness Trap is a most excellent starting point.

And finally, a new App has just been released – ACT Companion.  It’s currently $0.99 on Google Play until 10th January, after which it will be $17.99 (sorry Apple folks, it’s already that price on iTunes).  I only downloaded it yesterday, but it’s been reviewed highly by other ACT folk, and at that price why not grab it now?

Until next time… Be playful!

What do you think? Cancel reply